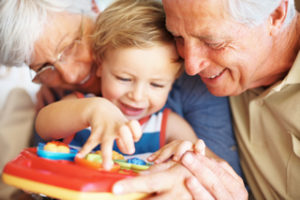 The parents married in 2001 and had two children. They separated in 2010. The husband was admitted to a psychiatric facility with suicidal ideation after going “into a rage.” At times during the marriage, he had been abusive to their son, yelling, losing his temper and, on one occasion, kicked, held, and grabbed the boy.

In March 2010, the mother filed for legal separation, but it was converted to a divorce in May 2011. The parties signed a consent decree of dissolution the following July. The father was awarded supervised parenting time. The children underwent family therapy and counseling in 2010, 2012, 2013 and 2015. Also in 2015, the parties agreed that the father would only be consulted on non-emergency matters. They would share legal decision-making. The mother, however, would have final decision making authority in any disagreement. They disagreed on grandparent visitation.

The paternal grandparents petitioned for court-ordered visitation under ARS § 25-409 in April 2014. For almost four years, the mother had prohibited contact between her children and the grandparents. She cut off access when she and her husband separated. The trial court entered temporary orders allowing both grandparents to participate for at least an hour a month in father’s supervised parenting time.

At trial, the grandparents testified as to their close relationship to the children. They had been present at one child’s birth and were there a week after the other’s birth. They traveled to Tucson regularly for the children’s school and sports activities, and to spend time with their son’s family. Twice they provided child care for multiple-day periods. They had been a regular presence in the children’s lives. Even though access was halted, grandparents continued to send cards and gifts on birthdays and holidays, but did not know whether these ever reached the grandkids.

One independent visit supervisor testified that, although initially awkward, the grandparent visitation went well as the children relaxed and became more comfortable. Another supervisor said the visitations were “very successful” and well planned with much “laughing, more kidding around.” Comparatively, visitation solely with the father was “unstructured” with the kids focused more on their mobile devices than their Dad.

The trial court determined that it was in the children’s best interest to have visitation with their grandparents. Video calls with grandparents were ordered every two weeks and they were allowed to participate in the father’s supervised parenting time. Mother’s motion for a new trial was denied and she appealed.

ARS § 25-409(C) provides, first, for a non-parent to seek visitation on a finding that such access is in the child’s best interests. And second, when for “grandparent or great-grandparent visitation, the marriage of the parents had been dissolved for at least three months.” ARS § 25-409(E) provides further:

“E. In deciding whether to grant visitation to a third party, the court shall give special weight to the legal parents’ opinion of what serves their child’s best interests and consider all relevant factors including.

1. The historical relationship, if any, between the child and the person seeking visitation.

2. The motivation of the requesting party seeking visitation.

3. The motivation of the person objecting to visitation.

4. The quantity of visitation time requested and the potential adverse impact that visitation will have on the child’s customary activities.”

Troxel set the standard on a parent’s fundamental right to exercise care, custody, and control in the rearing of a child as the parent deems appropriate. Parental rights are protected by the Due Process clause of the Fourteenth Amendment to the U.S. Constitution.

Grandparent Visitation Did Not Substantially Infringe on Parent’s Rights

First, in determining whether to grant grandparent visitation, the court applies the rebuttable presumption that “a fit parent acts in his or her child’s best interest in decisions … concerning grandparent visitation.” Citing McGovern v. McGovern, 201 Ariz. 172, 33 P3d 506 (Ariz. Ct. App. 2001).

Second, the court must give “’some special weight’ to the fit parent’s, determination of whether grandparent visitation is in the child’s best interests.’” Citing Troxel. The amount of weight should be determined on a case by case basis.

The above principles affect, but do not necessarily control, the trial court’s final determination on what is in the child’s best interests and what is reasonable grandparent visitation.

The appeals court distinguished the later case of Goodman v. Forsen, 239 Ariz. 110, 366 P3d 587 (Ariz. Ct. App. 2016), which the mother argued should apply retroactively to her case. In Goodman, the special weight accorded the sole legal parent’s objection to a non-parent’s visitation (a former girlfriend) required that the party seeking visitation prove that the “denial of visitation ‘would substantially impair the child’s best interests.’”

The Arizona Court of Appeals affirmed the lower court’s grandparent visitation order. The trial court correctly applied the fit-parent presumption and best interest factors under the statute. It accorded special weight to the mother’s opinion. And based upon sufficient evidence, concluded the grandparents overcame the fit-parent presumption. That is, the trial court determined that the grandparents successfully rebutted the presumption that the mother was acting in her children’s best interests by refusing grandparent visitation. The court made extensive findings regarding the children’s best interests, acknowledged the requirement that special weight be given the mother’s opinion as a fit parent and gave deference to it, and made findings on the best interests factors enumerated in the statute.

For more information, take a look at our talks about parenting time, non-parent visitation, and grandparents visitation rights in Arizona law.