Fathers have parenting rights under the U.S. Constitution and Arizona law with an equal legal opportunity for child custody. The challenge for dads? Successfully asserting those rights in court.

Whether a moral decision, economic necessity, or lifestyle choice, there is nothing extraordinary about shared childcare responsibilities. Nor is the stay-at-home Dad an anomaly. The norm has become one of joint parental responsibility. This does not mean obtaining a desirable custody arrangement is an easy row to hoe for everyone, because it isn’t. 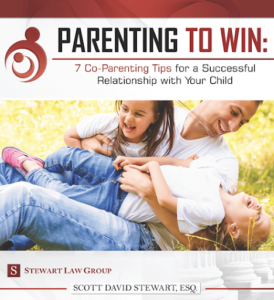 What Are Father’s Rights?

Today in Arizona, divorced parents with joint legal decision-making and parenting time are in the majority. Dads are granted sole legal decision-making with 182 or more days parenting time far more often than their predecessors dreamed possible. In every custody case, the court balances the child’s best interests against each parent’s Fourteenth Amendment liberty interest. For the best possible outcome, the father should commit all available resources to exercising his constitutionally protected, fundamental right to rear his own child.

What are father’s rights? As a legal parent, the child’s father has the right to the following:

The court will decide any element of a parenting plan lacking parties’ agreement.  In exercising father’s rights, Dad should propose a parenting plan in the child’s best interests and which acknowledges the other parent’s rights.

Only a legal parent has custody rights. A step-father does not, but may seek third party visitation by showing his relationship to the child is in loco parentis. A.R.S. § 25-409. An unmarried man must establish paternity first. He may voluntarily acknowledge paternity, but doing so without proof he is indeed the child’s biological father could be problematic and costly. Paternity can be established through scientific court-approved DNA testing. We can help the putative father establish paternity or, as is sometimes necessary, contest paternity. Establishing paternity – proving one is the child’s biological parent – is necessary before asserting father’s rights to custody.

In most family law cases, the father’s custody strategy plays out differently than the other parent’s. Stay on your toes. Don’t get blindsided. Know what to expect from the other party’s lawyer and trust in yours. Start formulating an aggressive strategy with Arizona Child Custody Essentials: What Every Parent Needs to Know, a guidebook by attorneys Scott David Stewart and Amy E. Dohrendorf.

Spouses need to decide the future of the marital residence. Who stays and who leaves? If Dad wants to keep the house and live there, then he should stay. From a negotiating standpoint, leaving when he really wants to stay could make things far more difficult. Fathers wanting equal or more parenting time should put serious thought into the marital home issue. Judges are not keen on moving children out of their homes and school districts when kids are doing fine right where they are. Is the status quo working? If yes, then the court will be less inclined to change the child’s primary residence unless evidence proves it necessary as with domestic violence or if the house must be sold.

Scott David Stewart analyzes these and other issues in the Men’s Arizona Divorce Playbook: Winning Divorce Strategies and Co-Parenting Survival Guide. Learn how to step up your game.

Arizona fathers are knowledgeable about childcare because they’re actively involved in their children’s daily lives. Dad’s parenting skills are crucial to his custody case. A father who desires sole or joint legal decision-making with substantial parenting time must show that he is, or can become, a parent the court should entrust with the child’s care. The court makes custody determinations based upon the child’s best interests.

⚖️ How does Dad prove his case? With his testimony. With evidence showing he is a dependable, involved parent. By testifying about his parenting time and his activities with the child, parenting time exchanges, doctor’s visits, parent-teacher consultations, homework lessons, overnights, outdoor activities, meals and dining out. Make a personal record of what occurred during your parenting time. Keeping journal can be advantageous and help boost credibility with the judge. Call now to request our Arizona Parenting Journal. Begin documenting each day of Dad’s parenting time. 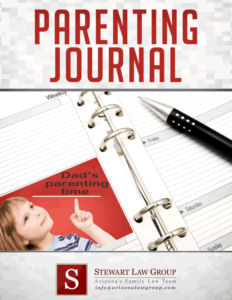 Make the Most of Family Court Proceedings

Family court proceedings offer numerous pathways for a judge to establish the child’s best interests. Make the most of each step in the process and stay positive. Each proceeding is a golden opportunity to learn what the law requires, to strategize with an experienced lawyer, to submit supporting evidence, and to make the strongest case possible for legal decision-making and parenting time. Child custody proceedings typically involve child custody evaluators, mediators, parenting coordinators, mental health professionals, and other experts.

Adoptive and biological fathers should strive to navigate family court proceedings deliberately and intelligently. Consistently asserting and reasserting their parental rights. Every custody proceeding is an opportunity to press Dad’s positive agenda while strengthening his reputation in court for truthfulness, integrity, reliability, and a man with good parenting skills. The father must prepare to match the other parent’s case for custody factor-by-factor. Ready, set, match!

In the hands of a child custody lawyer, father’s rights are a powerful force during negotiations and trial, should litigation be necessary. When agreement is negotiated, the parties’ attorneys write-up the agreed terms. The parenting plan agreement covers the child and the separation agreement covers everything else. The spouses sign and submit these agreements to the court. Absent objection, the judge will include both agreements in the final decree.

A trial only becomes necessary when parties are not in complete agreement on the legal issues raised in their case. Always be mindful that litigation is expensive and costly, especially when a custody contest and so-called “battle of the experts” ensues. As one would expect, custody trials are tough on parents and children alike. Ultimately, the family law judge must decide all outstanding issues, including every detail of a permanent parenting plan and parenting time schedule – during the entire school year, holidays, vacations, and so on.

⚖️ How does a father convince the judge that his proposed parenting plan is better for the child? Realistically, established caregiver patterns in the family (the status quo), plus a lingering bias against men having custody in general could make winning more difficult. Don’t cave on parenting issues! Obtaining a preferred custody arrangement is definitely achievable when Dad has these assets:

Don’t leave the future with your child to chance. Sign up for our free e-Custody Course and over prepare. 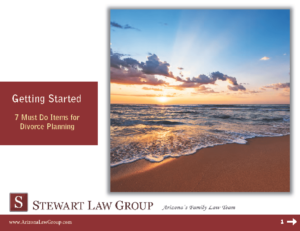 Why shouldn’t responsible fathers develop and maintain strong bonds with their children? Don’t buy into narrow-minded, outdated views of fatherhood. Spouses get divorced from each other, not from their children. No father should tolerate a diminished role. Don’t be relegated to child support payer with a few days’ vacation and every other birthday. There’s more to a child’s life than weekends and alternating holidays.

Almost uniformly, the fathers we represent tell us they want to be fully engaged in their children’s lives. Our clients want to be with their kids as much as possible. These dads choose to fight for their rights. They want to witness and share each child’s first step, first day of school, first trophy, first dance, and high school graduation day. They want to take family photographs, not receive them as email attachments. They want to be present for the tiny day-to-day wonders and joys, sorrows and mysteries of a child growing up.

Be forewarned. The father who does not vigorously enforce his parental rights may find himself emotionally and physically distanced from his child, perhaps permanently. There are negative consequences for the child, too. Preventing Dad’s active parenting can have a detrimental impact on the child’s behavior, education, and society. Children with involved fathers do better overall. Be mindful with each court proceeding that enforcing father’s legal rights also protects the child.

In applying Arizona’s child custody factors equally as required by A.R.S. § 25-403, the judge must recognize and respect a father’s role in raising the child. Attorneys with Stewart Law Group pursue fair settlements on behalf of fathers and advocate for dads’ rights. We believe strong family bonds between father and child are invaluable and irreplaceable. Contact us for information about our father’s rights representation.

On the flip side of custody is child support. Applying the Arizona Child Support Guidelines is mandatory, so rarely is child support contested. Although dads still carry the bulk of child support responsibilities, there is no rule that fathers pay support. Both parents contribute to the child’s expenses. The monthly amount to be paid is tied to gross income from all sources, the parenting time each party has under the parenting plan, and expenses for child care, health insurance, and special needs, among other things. The Guidelines do not favor mothers over fathers or vice versa.

In determining custody, a parent’s domestic violence, child abuse, or child neglect are urgent factors and not in the child’s best interests. One parent’s order of protection against the other has an impact on custody. Another factor the judge considers is whether a parent was convicted of making a false report of child abuse or neglect. A.R.S. § 13-2907.02. Unfortunately, a father is sometimes falsely accused by the other parent. If deliberately made and intentionally false, then trumped-up charges are an ugly attempt at obtaining unfair advantage in custody proceedings. We have represented many fathers in this situation. If the other parent falsely accuses Dad of abuse with no factual basis for the allegations, then only swift legal action can prevent irreparable harm to the father-child relationship. Do not make matters worse by violating an order of protection. Instead, immediately contact a father’s rights lawyer in Phoenix.

What Our Clients Say:

“I am extremely pleased with the knowledge, compassion and tenacity of Ashley Rahaman. She quickly stepped into a contentious, on-going custody battle, and not only was she able to set the record straight with the judge, but she settled the case! I highly recommend Ashley for any family law matter.”

Attorneys with the Stewart Law Group diligently protect father’s rights in divorce, paternity establishment, child relocation, modification of custody and support, and related court proceedings. We are passionate about helping dads build and maintain strong bonds with their sons and daughters.

Contact us today at (602) 548-3400 about any and all father’s rights matters. Our law offices are located throughout the Valley, in Phoenix, Scottsdale, Chandler,

For more information on Family Law and Child Custody in Arizona click to review the following Articles and Resources: 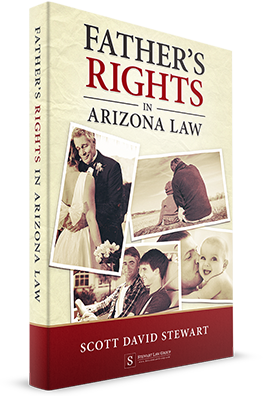 
During the Custody Arrangement Process